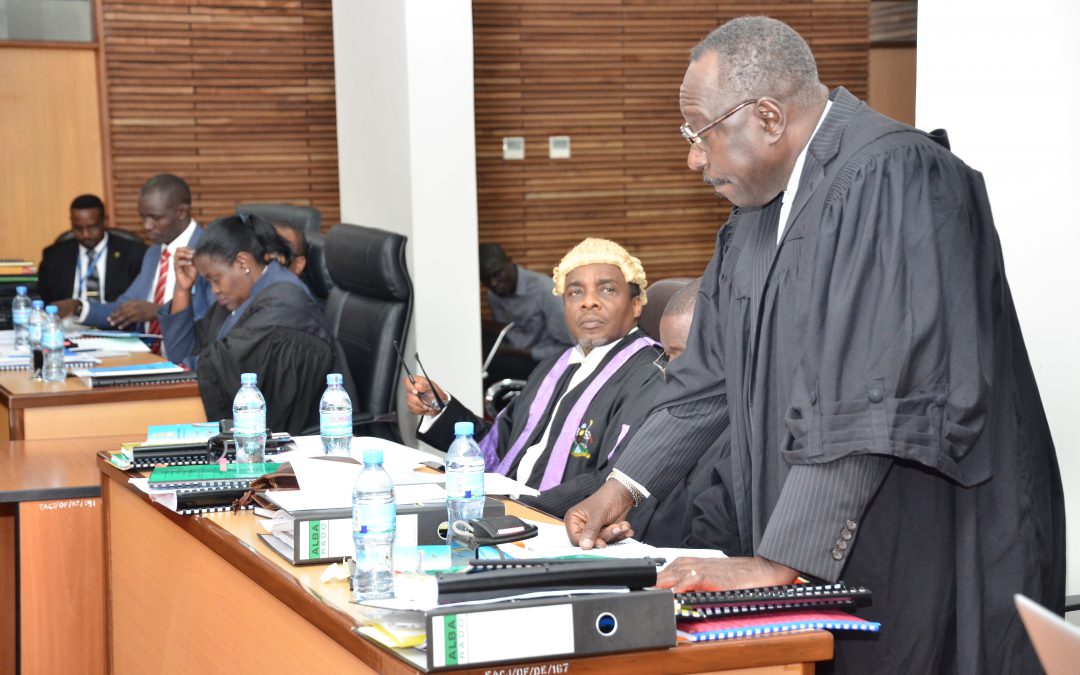 East African Court of Justice Arusha 29th October 2019: The First Instance Division Court allowed Application No. 6 of 2019 filed by the Attorney General (AG) of the Republic of Uganda seeking court to enlarge time within which the response to the case (Reference) may be served to the Applicant in the interest of justice. The Court in it s ruling, exercised its discretion under Rule 4 of the Court’s Rules of Procedure to grant the request. Court allowing the Application followed the dismissal of Application No. 4 of 2019 filed by the Applicant (Mabirizi) seeking court to strike out the said Response to the Case (Reference) off the record of the Court on grounds that; the AG did file and serve his response within forty five (45) days as by the law, that the supporting documents of the impugned response were not filed together, that the response and affidavit in reply contain general and evasive denials, are frivolous and vexatious and the affidavit contains irrelevant and scandalous material. 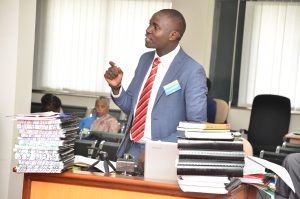 Earlier the Applicant in his arguments before court, Mabirizi argued that the rules of the Court provide that a respondent shall be given 45 days after being served a notification of the Reference, to file and serve upon the Applicant’s response. The Respondent was served a notification on the 3rd May 2019, hence 45 days expired on 20th June 2019. The document was only served on the 24th of June 2019. The Applicant submitted that the Court consider the Respondent’s response null despite the merits or demerits provided as a response was not filed within the required time. He further urged that time limitations are not a matter of technicality but substantial matters. On the aspect of time limitations, the response should be struck out as there was not only flouting of time but also because the Attorney General has been a frequent member of the Court. The court however declined to strike out the affidavit (supporting document) in its entirely but struck down paragraph 17 of the affidavit and dismissed the Application. Court made no orders as to costs in both Applications. 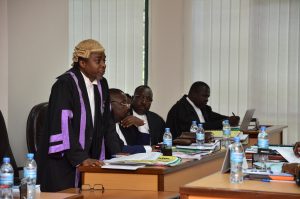 Respondent, The Attorney General of Uganda, Hon William Byaruhanga introducing the Parties to the Court

The court also after the ruling in the 2 applications, further heard Application No 5 of 2019 filed by Mabirizi again, seeking for an interim order restraining the Government of Uganda, its agencies, bodies, Commissions and any setting from implementing any of the provisions of the Uganda Constitution (Amendment) Act, 2018 and halt the implementation of the Uganda Electoral Commission Strategic Plan and Road Map for 2020/2021 electoral period or any related plans and also to halt all the processes or preparations for 2020/2021 general elections including but not limited to undertaking any step in pursuit of amendments to electoral laws to align with the Uganda Constitution.

The Applicant submitted that filing the Case (Reference No 6. of 2019) challenging the Uganda Constitution (Amendment) Act 2018, a matter pending determination of the Court, that the case raises serious issues for consideration concerning rule of law, democratic governance and universally accepted standards of human rights. He further argued that Laws in Uganda remain in doubt until all legal challenges against the proposed laws are resolved.

Mr Mabirizi also contended that he shall suffer irreparable damage if the Act is implemented, subjecting citizens of the Republic of Uganda to a law under scrutiny for infringing on the core principles of the rule of law, democratic governance and universally accepted standards of human rights cannot be adequately compensated by damages. He asked court to grant the orders sought in the Application with costs.
The Attorney General of Uganda represented by the Solicitor General Hon. Francis Ateko opposed the Application and argued that Mr. Male Mabirizi has failed to satisfy the conditions for the grant of an injunction to halt the implementation of the Uganda Electoral Commission Strategic plan and road map for the 2020/2021 General elections. Further that the Applicant has failed to show court that he has triable issues before the Court, since all the matters that he raised were resolved by the Supreme Court of Uganda.

The Respondent conceded that the interim orders are governed by Article 30 of the Treaty, In contention, the applicant must show a prima facie case with probability of success, an injunction will only be granted unless the applicant suffers an irreparable injury that cannot be compensated and when the Court is in doubt, a decision shall be made on the balance of convenience, therefore submitting none of these favor the applicant. Secondly, Hon Ateko said that the Applicant will not suffer any irreparable injury that cannot be compensated in the event that he wins the case which he has asked for damages and interest on the same in his pleadings before the Court. 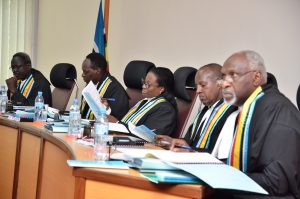 Judges in court referring to the Court’s Rules of Procedure

Lastly, the balance of convenience is in favour of all Ugandans who are expecting that in 2021 that shall have elections and so to halt the preparatory process would be a recipe for anarchy in Uganda. Hon Ateko asked court not to grant the orders sought and dismiss the Application with costs.

The 3 Applications arose from the case Reference No 6. of 2019 challenging the Uganda Constitution (Amendment) Act 2018, which was filed by a resident of Kampala, a one Male H. Mabirizi K. Kwanukia Vs the Attorney General of the Republic of Uganda, a matter that is pending before court.

The court will deliver the ruling on notice to the parties.

The Applicant Mr Male Mabirizi appeared in person and the Respondent (Attorney General of Uganda Hon William Byaruhanga was in court with his Deputy Hon Mwesigwa Rukutana and the Solicitor General Hon Francis Ateko accompanied by other Senior State Attorneys from the AG’s office.