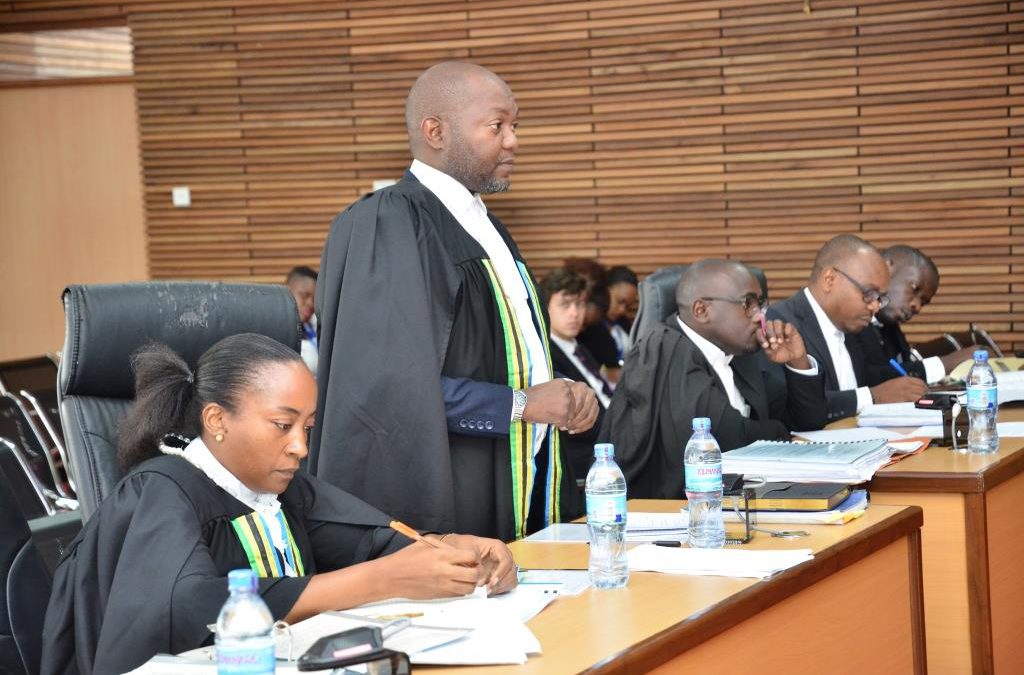 East African Court of Justice Arusha 18th February 2020: The Appellate Division heard an Application filed by Managing Editor Mseto & another, seeking Court to strike out a notice of Appeal that was filed by the Attorney General of the United Republic of Tanzania, intending to appeal against the decision of the First Instance which declared that the government of Tanzania violated the Treaty for the establishment of the East African Community. The First Instance in its decision which was delivered on 21st June 2018 declared that, the order issued by the Minister for Information, Culture, Arts and Sports of the United Republic of dated 10th August 2016 vide Gazette Notice No. 242 restricts press freedom and thereby constitutes a violation of the Respondent’s gov’t of Tanzania obligation under the Treaty to uphold and protect the principles of democracy, rule of law, accountability, transparency and good governance as specified under Articles 6 (d) and 7 (2) of the Treaty. The First Instance further ordered the Minister to annul the orders forthwith and allow the Applicant to resume publication of Mseto. Also ordered that the United Republic of Tanzania shall in accordance with Article 38 (3) of the Treaty take measure, without delay, to implement this judgment within its internal legal mechanism and the costs of the Reference shall be borne by the Respondent.

Managing Editor Mseto and Hali hali Publishers Limited Hali Halisi (Applicants) represented by Counsel Flugence Massawe submitted to court that the notice of Appeal was filed on 19th August 2018 after the decision of the First Instance Division had been delivered and that there is no Appeal that has been filed to date, the Lawyer arguing that there is no justification for the delay. Massawe told Court that the Applicants have not enjoyed the benefits of the Judgment but rather continues to suffer the ban of the Mseto publication of which he contented that the ban expired in August 2019, that the ban was for a period of 36 months.

Also Counsel Hamisi Mayombo, representing the Applicants submitted that the government of Tanzania (Respondent) further filed an Application seeking for extension of time to file their Appeal out of time and that it was filed just immediately after the Applicant had filed this application to strike out the notice of Appeal. In his argument Counsel added that there is no sufficient reason for the delay to file the Appeal as intended by the Respondent.

Counsels for the Applicants asked court to strike out the notice of Appeal filed by the Respondent in order to allow the Applicants enjoy the fruits of the decision.

On the Respondent’s part, Counsel Abubakar Mrisha submitted that, the main reason for the delay to file an Appeal is due to restructuring in the office of the Attorney General of Tanzania moving from Dar es Salaam to Dodoma at the time which led the Respondent filing the application for extension of time to file the Appeal out of time. He further prayed court to allow the Appeal be filed to give guidance to the Minister of Information, Culture, Arts & Sports of Tanzania and the citizens at large.

He also added that the new law in place (the Media Services Act, 2016) provides a procedure to be followed by any person who wants to renew his or her licence hence arguing that the Applicant has not followed and that the Applicants have a duty to follow the procedure and renew their licence. He prayed Court to dismiss the Application with costs and allow the Appeal to be filed.

The court shall deliver the Ruling on notice.

The background of Mseto news paper ban, it was the Applicants’ case that, on 4th August 2016, Mseto published an Article entitled “Waziri amchafua JPM” (“Minister soils JPM”). The news item was to the effect that one engineer Edwin Ngonyani, an Assistant Minister in President John Pombe Magufuli’s government had taken bribes from certain persons and entities in a bid to raise funds for President Magufuli’s election campaigns.

Following the publication, on 8th August 2016, Mseto was served with anotice from Mr Nape Nnauye, the former Tanzania Minister of information, Youth, Culture and Sports demanding explanations regarding the published article by 9th August 2016 on specific hours.

On 9th August 2016, the Applicants responded to the letter by stating that the news item was published to safeguard the image of the President of Tanzania and that of his office and that the Applicants’ view, they had committed no illegality. However, on 10th August 2016, the Applicants were issued with an order banning Mseto publication. On 11th August a press conference was held by the Minister where he announced the order banning Mseto Publication, hence filing the Case to this court which granted orders in their favour.