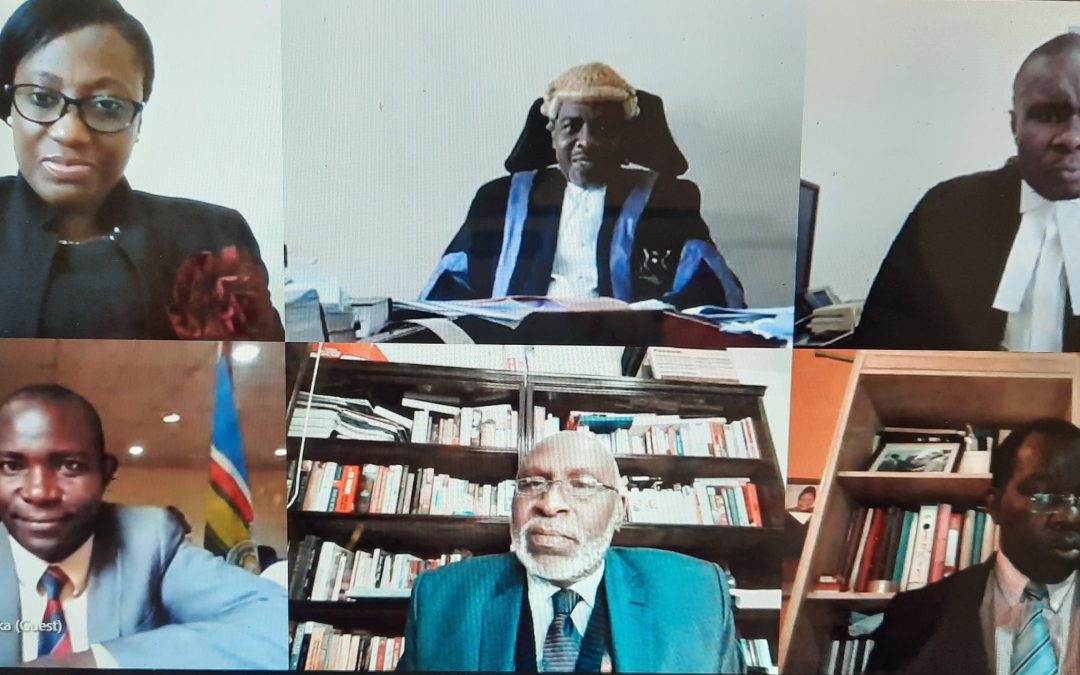 East African Court of Justice, 24 July 2020:  The First Instance Division concluded its inception online sessions which resumed mid-June 2020. During the session 21 cases were handled and these include 4 Judgments, 8 Rulings, 6 Hearings and 7 Scheduling conferences, all via video conference and live streaming the proceedings on the website. This has been a milestone for the court in delivering justice as deserved to the East Africans during this Covid-19 Pandemic that has affected work places globally.

In its last session, Court allowed Reference No. 9 of 2017, filed by Hon Justice Malek Mathiang Malek (Applicant) versus the Minister of Justice of the Republic of South Sudan (1st Respondent) and the Secretary General of the East African Community (2nd Respondent). The Applicant challenged the government of South Sudan for his dismissal from office as a Justice of the Court of Appeal of South Sudan in July 2017. Court held that the Republic of South Sudan contravened its Transitional Constitution of 2011, and in turn the Treaty for the Establishment of the East African Community and allowed the matter with costs awarded to the Applicant.

Further, Court said that the impugned Decree does not on the face of it make any reference to a recommendation by the judicial Service Council to the President for the removal of the Justices. There is no evidence to show that this very specific and integral provision of Article 134(2) of the Constitution of South Sudan was complied with. Additionally, the uncontroverted evidence before this Court is that the Republic of South Sudan failed to comply with the specific and mandatory requirements provided for in the Judiciary Act, 2008 prior to the issuance of the impugned Decree.

The Court however dismissed the case as against the Secretary General of EAC (2nd Respondent), that the Applicant has not shown that the Secretary General was aware or ought reasonably to have been aware of the impugned Decree and the actions flowing therefrom prior to the filing of the Reference, so as to kick-start the obligations under Article 29 (1). It is noted that the 2nd Respondent acted expeditiously upon receipt of the Reference to write to the 1st Respondent State and call for a report.

During this session also, Court dismissed Reference No.8 of 2018 filed by Hassan Bassajbalaba & Another versus The Attorney General of the Republic of Uganda. The matter challenged actions of the Constitutional Court of Uganda, Directorate of Public Prosecutions and Uganda Police Force, as well as the failure of the Minister of Justice and Constitutional Affairs to remedy those actions. Court declined to consider the impugned actions of the Constitutional Court, DPP and Uganda Police because they had been concurrently submitted to the Uganda Supreme Court, a duplicity of proceedings. Court dismissed the complaint against the Minister of Justice for being in breach of customary international law on the institutional independence of judiciaries, while also violating the Uganda Constitution that protects the DPP and Uganda Police from the direction and control of the Minister. Court awarded costs to the Respondent.

Among other matters the First Instance Division heard Consolidated References No. 14 of 2017; 6 of 2018, & 6 of 2019 filed by Male Mabirizi Kiwanuka and Others versus The Attorney General of Uganda. The matter challenges the decision of the Supreme Court of Uganda that upheld the enactment of Constitutional (Amendment) Act No.2 of 2018. The hearing commenced with the withdraw of Ref. No 14 of 2017 & Ref. No. 6 of 2018. The Judgment will be delivered on notice.

Further, Court adjourned the hearing of Reference No. 10 of 2017 filed by Ololosokwan Village Council & 3 Others versus the Attorney General of the United Republic of Tanzania. The matter was scheduled for further cross examination, however the Respondent objected to the late filing and service of expert evidence presented by the Applicants. Court adjourned the hearing to allow the Respondent (AG Tanzania) adequate time to review the report and be able to cross examine the witness. The Reference faults the Government of Tanzania over alleged forceful eviction of residents & livestock from the land bordering Serengeti National Park.

In addition, Court heard preliminary objections in Reference No. 9 of 2016 filed by Rashid Salim Adiy & Others versus the Attorney General of Tanzania & 2 others, which challenges the legality of the Union of Tanganyika & Zanzibar. The AG Tanzania raised the preliminary objections on the jurisdiction of the Court to entertain the case and also the issue of the matter being time barred. Court will deliver the ruling on notice.

Court also heard the cross-examination in Reference No. 10 of 2013 filed by Union Trade Centre versus The Attorney General of Rwanda & 3 Others. The witness who was cross examined was Tribert Rujugiro Ayabatwa who represented UTC (Applicant) and sued the Government on behalf of the Company. The matter challenges the government of Rwanda over alleged illegal seizure and auctioning of the Union Trade Centre Mall in Kigali, Rwanda. The witness gave evidence from Dubai and the matter will proceed with filing written submissions by the Parties and the date for highlighting on the submissions will be communicated.

Her Lordship the Principal Judge, Hon Lady Justice Monica Mugenyi in her remarks congratulated the Court for the new digital innovation as well as the litigants for embracing the system which will improve justice delivery in the region. She also commended their Lordships, the judges of the First Instance Division for their commitment to ensure smooth session without difficulties and look forward to resume soon.

The Court has continued to benefit from the new digital development these include; the electronic filing of cases by the litigants, electronic signing of the Court Judgments and Rulings by the Judges, live streaming of Court sessions to enhance access to justice to the public. This has indicated the efficiency of the Case Management System as provided in the new EACJ Rules of 2019.

Video conference proceedings of the Court are pursuant to Rule 132 & 133 of the East African Court of Justice Rules of Procedure and provides:

Rule 133 on electronic exchange of documents provides that:

4. Parties can on request accede to copies of Court documents in an electronic format.

5. At any time during or after Court proceedings, the Court may deliver any decision electronically, by transmitting a copy of the judgment or ruling to the parties through e-mail, instant messaging applications  and/or            any       other    widely   used     electronic communication service.