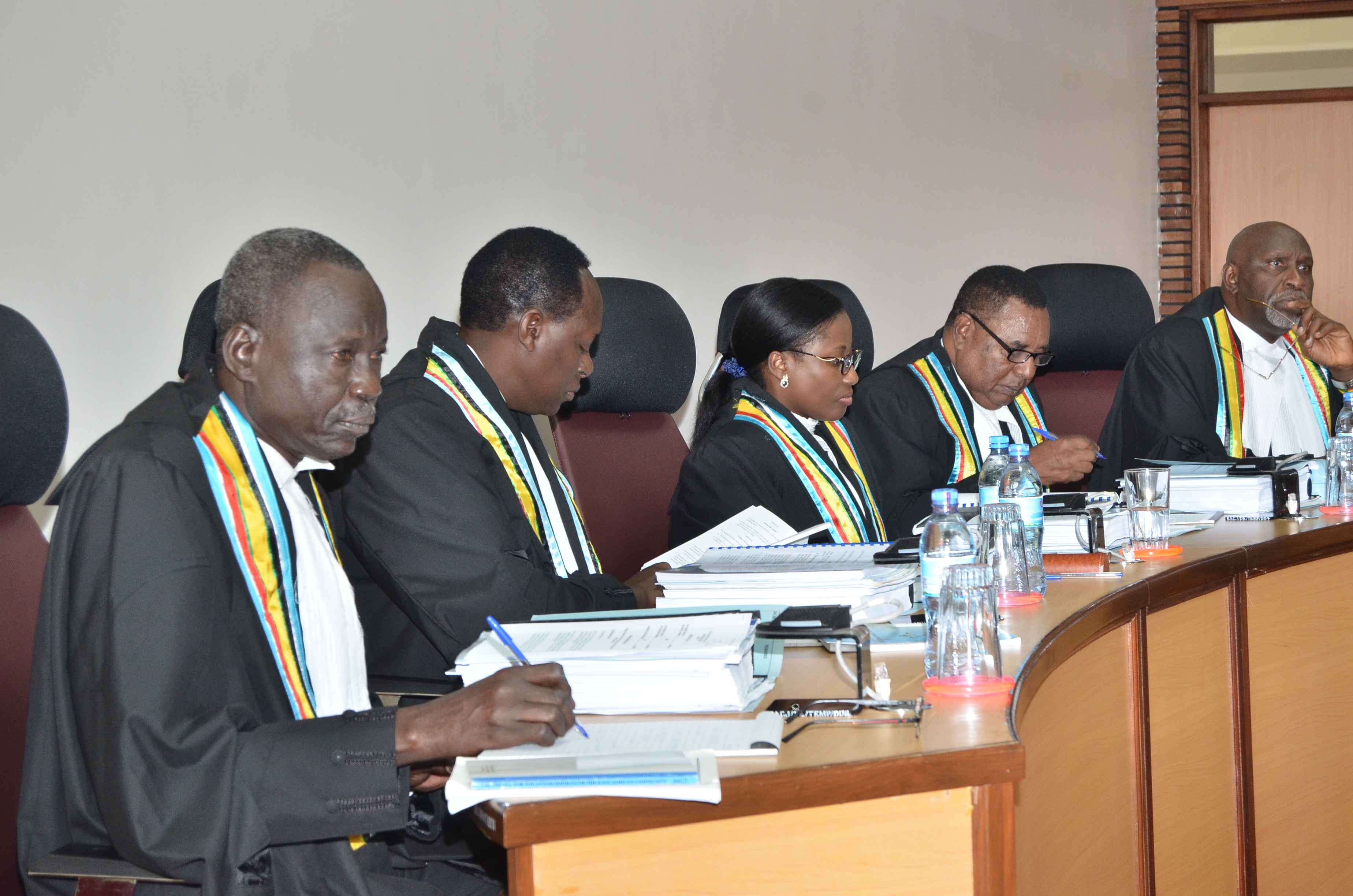 East African Court of Justice Arusha 11th March 2019: The First Instance Division yesterday heard the case filed by the government of Burundi (Applicant) challenging the process of electing the current Speaker of the East African Legislative Assembly (EALA) which was carried out on 19th December 2017. The Applicant argues that elections that were held in the absence of the Honourable Members of the Republic of Burundi and the United Republic of Tanzania are in violation of the fundamental Principles of the Community under Articles 6 (d), 7 and 57 (1) and Rule 12 (1) of EALA Rules of Procedure.

Mr Nestor Kayobera Counsel representing Burundi, submitted to court that the election of the Speaker of EALA is governed by the EAC Treaty and the Assembly’s Rules of procedure and that Article 9 (4) of the Treaty obligates Organs and Institutions of the Community to perform the functions and act within the limits of the powers conferred upon them by the Treaty.

Mr. Kayobera also contended that the issue of quorum is a Treaty obligation under Article 57 and rule 12 (1) of EALA Rules of Procedure which provides that; The quorum of the House or of the Committee of the Whole House shall be half of the elected Members and such quorum shall be composed of at least one third of the elected Members from each Partner State”. He argued that, violation of the rule on quorum entails violation of the Treaty.

Counsel further submitted that on 19th December 2017, the Speaker of EALA was elected without the Members from Burundi and Tanzania hence a violation of the principles of good governance and Rule of Law. Mr. Kayobera also contended that Article 23 of the Treaty provides powers to the Court as the judicial organ to ensure adherence to law in the interpretation and application of and compliance of the Treaty.

Dr Anthony Kafumbe, representing the Secretary General (Respondent), on his part, submitted that the election of the Speaker was done under Part III of the Rules of Procedure of the Assembly. He further submitted that under Part III of EALA Rules of procedure, Rule 6 (9) (c) on the election of the Speaker, it is not mandatory for every member to vote, hence the Members of Burundi and Tanzania had liberty not to vote. Rule 6 (9) (c) states that; “After all Members who wish to vote have voted, the Clerk shall in full view of the Members present, empty the ballot box and immediately count the ballot paper contained in it”. He also argued that the issue of quorum does not apply, that it only applies when the house is duly constituted. He therefore submitted that there was no illegal election process, that the Speaker was elected under relevant provisions of the Rules of procedure of the Assembly and that the election process did not violate the Treaty. Dr. Kafumbe further submitted that as Article 9 of the Treaty obligates the Organs and Institutions of the Community, the Assembly acted within its mandate and in accordance with its rules of procedure.

Dr. Kafumbe also contended that Members of the Assembly have accepted the Speaker and a lot of business is going on and therefore, it would not be helpful to nullify the election and order fresh election.

Dr. Kafumbe also took issue with the Affidavits sworn by the Applicant’s Counsel on the basis of information relayed to him by EALA’s Members from the Republic of Burundi and submitted that the Court should reject the said affidavits as evidence since Counsel was not a witness and could not even have been a witness and a Counsel at the same time; the impugned affidavits ought to have been sworn by the Burundi’s Members of EALA, he argued.
In light of his submissions, Dr. Kafumbe prayed that the Reference be dismissed with costs to the Respondent. Dr Kafumbe was with Ms Brenda Ntihinyurwa Legal expert in the Office of the Counsel to the Community.

The Intervener Hon Fred Mukasa Mbidde represented by Mr Donald Deya, Mr. Justin Semuyaba and Mr Nelson Ndeki in court, associated their submissions with the Respondent and asked the Court not to grant the orders sought by the Applicants.

The Court will deliver the judgment on notice.

Notice for the editors:

The current Speaker of the East African Legislative Assembly is Rt Hon Martin Ngoga from the Republic of Rwanda, he was elected on 19th December 2017. The position of the Speaker is rotational and serves a period of five years.