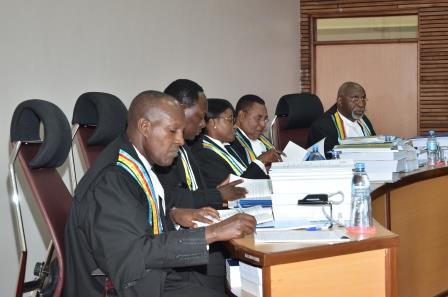 East African Court of Justice Arusha 21st March 2019: The First Instance Division today heard a preliminary objection raised by the Central Bank of Kenya (CBK) which is being sued over losses incurred for taking over the control of the Imperial Bank Limited in Kenya. CBK representative, Mr James Ochieng, argued that it is not an Institution of the Community established under the Treaty to be sued, but rather a body under the government of Kenya and therefore submitted that, it is only the Attorney General of Kenya who can appear before the Court for any wrong act committed by CBK pursuant to Article 30 of the Treaty stipulating who can sue and be sued.

Mr. Ochieng also submitted that this Court does not have the jurisdiction to entertain cases against CBK since those matters can only be handled in the judiciary of Kenya. He therefore asked Court to allow the preliminary objection with costs.

Prof Fredrick Edward Ssempebwa, on behalf of the Pontrilas Investment Limited (the Applicant) in the main Reference, acknowledged that the Central Bank of Kenya (CBK) is not among the Institutions of the East African Community. However, relying on the Protocol of the EAC Monetary Union which gives a pivotal role to Partner States’ Central Banks in the implementation of the said Protocol, he submitted that CBK is conceptually and functionally an institution of the Community and should be so held for the purposes of the Reference.

The representative of the Attorney General of Kenya, Mr Charles Mutinda, agreed with the submissions of the Counsel for the Central Bank of Kenya and asked the Court to allow the Preliminary objection and strike out the Central Bank as the 1st Respondent in this matter.

The subject of the case is that, on 13th October 2015, Imperial Bank Ltd (IBL) was put under receivership and placed under the supervision, management and control of the Kenya Deposit Insurance Corporations (KDIC) for twelve months by the Central Bank of Kenya’s actions in accordance to Section 34(2)(b) of the Banking Act.

The appointment of KDIC as a receiver for IBL was alleged to be in the interest of the Bank depositors, creditors, and the public. This took place when the Central Bank realised fraudulent activities of substantial magnitude and misrepresentation of the Bank’s financial status.

That, on various occasions after the placing of the receivership, the Central Bank made several undertakings to resolve and conclude the same with the objective of safeguarding the interests of depositors, creditors and the wider public interest.

That, on 28th June 2017, the Governor of the Central Bank, while addressing depositors of Imperial Bank, stated that the Bank would be sold or liquidated thus making it known that depositors were to lose their deposits.

The Applicant alleges that, the Central Bank failed in its duty to regulate and supervise Imperial Bank in the interest of the public by maintaining economic stability through adherence to the rule of law, good governance and its own supervisory framework thereby leading to shocks in the economy as well as losses to depositors and creditors.
The particulars of the Central Bank’s failure in its duties include alleged massive frauds committed by the managers/administrators of Imperial Bank over the Bank’s funds, with the knowledge and/or connivance of the Central Bank’s officials, servants or agents through illegal transactions/acts which came to the knowledge of the Applicants in August 2017.

The Applicant further alleges that, the government of Kenya failed in its duty to give general direction to the Central Bank so as to ensure adherence to good governance and the rule of law as required by the Treaty, plus an efficient, transparent and stable financial system as required by the Protocol for the Establishment of the East African Community Monetary Union.

The Applicant therefore seeks court orders that both the Central Bank of Kenya and the Government of Kenya breached their obligations under the Treaty and the East African Community Monetary Union Protocol and the Applicant is entitled to compensation and costs.

The Court will deliver the Ruling on the preliminary objection and decide whether the Central Bank will remain as a party in the matter and then schedule for the hearing of the main case.

Notice for the editors:

Provisions refered to in the treaty :
Article 30 (1) provides that; Subject to the provisions of Article 27 of this Treaty, any person who is resident in a Partner State may refer for determination by the Court, the legality of any Act, regulation, directive, decision or action of a Partner State or an institution of the Community on the grounds that such Act, regulation, directive, decision or action is unlawful or is an infringement of the provisions of this Treaty.
Article 30 (3) provides that; The Court shall have no jurisdiction under this Article where an Act, regulation, directive, decision or action has been reserved under this Treaty to an institution of a Partner State.
Article 9 (2) provides that ; The institutions of the Community shall be such bodies, departments and services as may be established by the Summit.
Article 9 (3) provides that; Upon the entry into force of this Treaty, the East African Development Bank established by the Treaty Amending and Re-enacting the Charter of the East African Development Bank, 1980 and the Lake Victoria Fisheries Organisation established by the Convention (Final Act) for the Establishment of the Lake Victoria Fisheries Organisation, 1994 and surviving institutions of the former East African Community shall be deemed to be institutions of the Community and shall be designated and function as such.
Article 20 (2) of the Protocol on the Establishment of the EAC Monetary union provides that; The East African Central Bank shall together with the national banks of the Partner States in the single Currency area, form a functionally integrated system of central banks.
About the EACJ